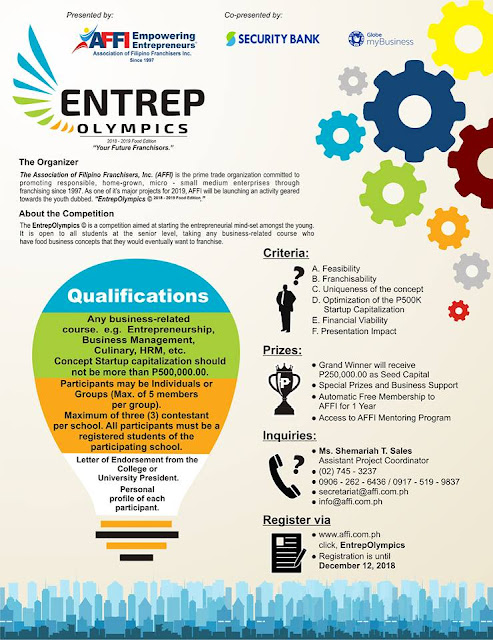 AFFI Proudly present:
EntrepOlympics 2018 - 2019 Food Edition
A competition aimed at starting the entrepreneurial mind-set amongst the young and to build a next future responsible franchisors.
Join and be the next successful entrepreneur!
for details and mechanics please call or text AFFI Secretariat at 0917 - 519 - 9837, (02) 745 - 3237 or email us at info@affi.com.ph / secretariat@affi.com.ph
to register please click the link below.
https://tinyurl.com/EntrepOlympicsYr1
Your future in Business begins here!
Posted by Demure Sweetie at 9:06 AM No comments:

Email ThisBlogThis!Share to TwitterShare to FacebookShare to Pinterest
Labels: Food

RAWR Awards bare its official winners for the Year 2018 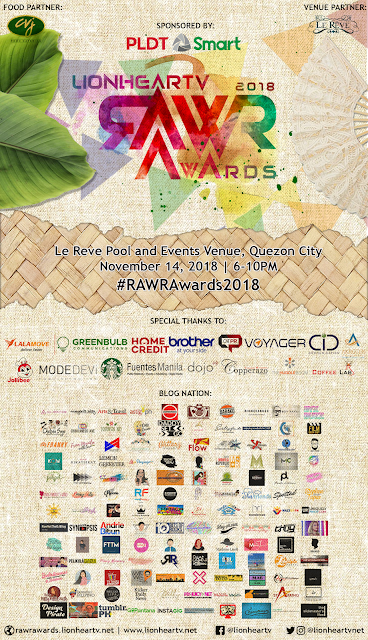 It was a night of Philippine fiesta-themed for the awards night of the annual RAWR Awards 2018 and was held last November 14 at Le Rêve Pool and Events Place in Quezon City.


From its last year’s list of awards of 25, the awards this year has grown to 30 including special citations.


Both the TNT Boys and the Queen of All Media Kris Aquino were recognized as the Royal Cub and the Royal Lion awardees.  The Royal Cub Award recognizes young individuals or groups that exhibited excellence in their craft and have earned respect for their passion and talents that they have shared to world. Meanwhile, the Royal Lion Award is a distinct honour for someone who has shown courage beyond all odds. Though hard to find like a precious gem, still that individual sparkles in all aspects.


Both Joshua Garcia and Kathryn Bernardo were named as Actor and Actress of the Year for their respective body of work in ‘The Good Son’ and ‘The Hows of Us’. JM De Guzman was also given the award for The Great Comeback, Tony Labrusca as Breakthrough Artist of the Year, Donny Pangilinan as Favorite Newbie, Vice Ganda as Favorite TV Host, DJ Jhai Ho as Favorite Radio DJ, Hashtags as Favorite Group and MayWard as the Love Team of the Year.


The Kapuso Network managed to clinch five awards—Kyline Alcantara was named Favorite Kontrabida for her effective portrayal of a villainess in ‘Kambal Karibal’, ‘Inday Will Always Love You’ as Bet na Bet na Teleserye, Maine Mendoza as Pak na Pak na Comedian, Jessica Soho as Female News Personality of the Year and Kimpoy Feliciano as Digital Influencer of the Year.


Here are the rest of the winners:


LionHearTV’s RAWR Awards honor and recognize the Best and the Brightest in the Philippine Entertianment industry every year.


KaladKaren Davila returned onstage to host the fourth edition of this blogger and Netizen-empowered awards.
Posted by Demure Sweetie at 9:01 AM No comments:

When it comes to the real estate transaction, Leaxcoin becomes one of the projects offered in the
crypto world. For you who are interested to learn further about this project, let us learn more about it.

What Is Leaxcoin?
Leaxcoin is actually another decentralized worldwide currency which adopts the blockchain technology
especially Ethereum which is considered as the leader for smart contract evolution. This platform
presents a solution for all problems associated with transactions in the real estate industry.

In this case, the solution offered includes rent, purchase, lease as well as real estate launch or
property registry. By using the platform, users are supposed to away from any problem around real
estate transaction. 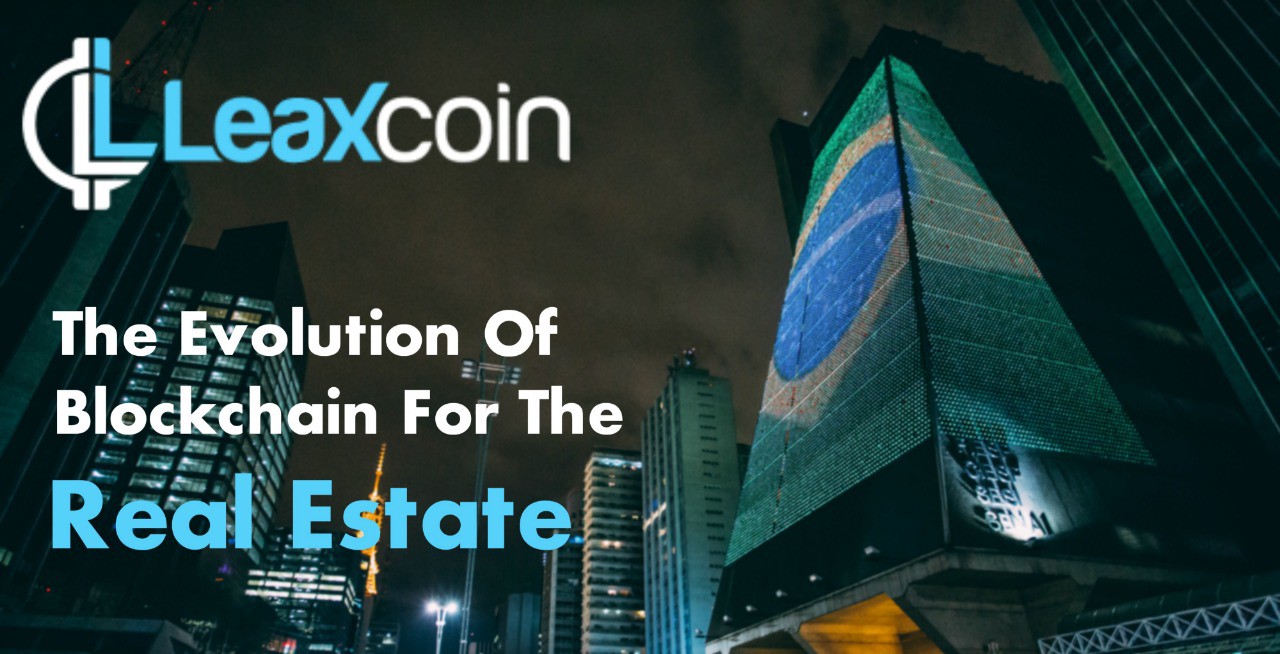 In its website, it is said that the platform can be a success when it has a worldwide real estate
community specialists alongside experienced developers. In this case, the team will make compulsory
tools to link all process of real estate and the property regulatory agencies into the blockchain.

The Primary Focus of Leaxcoin Project
There are some elements that become the main focus of this project. The following is a little detail
about each of the element.

·        Property Registry
Thanks to the blockchain technology used to protect the platform, The Leaxcoin ensures an
unchangeable database. Here, the whole platform ecosystem is aimed for local as well as the
worldwide community with applications, solutions, and tools to a complete integration with the notary,
registry and government institutions.

·        Contracts, Listing, and Real Estate Crowdsale
Leaxcoin offers a platform that is transparent and free from conflicts. More interestingly, there is
nothing like high cost or time-consuming in the process of verification. Any information will be treated
automatically based on the agreed protocol.

·        Official Leaxcoin Wallet
There will be Leaxcoin wallet within the platform. The wallet here is fully developed within the
blockchain network of Ethereum. The network has been encrypted as well to prevent theft and fraud
or other problems.

·        Community and Worldwide Support
Together with all the team, a worldwide community is supposed to be built to provide new resources
for the revolution of the real estate world. More importantly, the community will be encouraged and
rewarded as well to get involved in the marketing and development of the platform.

Conclusion
To conclude, Leaxcoin is a revolutionary platform with blockchain technology as its base. It offers a
solution for any problem that usually appears in the traditional real estate transaction. It has several
focuses with property registry as one of them. Overall, it can be an excellent cryptocurrency to check
for.
For more information:
Website : http://leax.io/
Whitepaper : http://leax.io/whitepaper-leaxcoin.pdf
ANN : https://bitcointalk.org/index.php?topic=4815157
Telegram : https://t.me/FoundationLeax
Twitter : https://twitter.com/FoundationLeax
Medium : https://medium.com/@leaxfoundation
Facebook: https://www.facebook.com/LeaxFoundationOfficial/

Posted by Demure Sweetie at 8:58 PM No comments:

Huion has established a powerful sales network across the world with Shenzhen at its core, including over fifty coun-tries and regions such as North America, Europe, Japan, South Korea, Southeast Asia and mainland China. It has also established long-running strategic cooperative partnership with many world-class brands in the fields of technology,marketing, servicing and more.

In 2007-2010, Huion started to research and develop their core technology-Electromagnetic Digital Input Technology.

In 2011, with the formal production of the main control chip HV400, of which Huion owns the independent intellectual property rights, Huion became one of the few companies in the world with chip-level technology in the field of electromagnetic input recognition.

In 2017, Huion's inspiroy G10T graphic tablet won the china red star design award which has the most powerful influence in china's industry design world.In the same year, the Australian branch is open to business.

Huion will have a launch party on November 13 1pm at EDSA Shangrila. Ynzal Marketing Corp. will feature the latest products from Huion through various guest speakers from the company and the creative industry.


There will be on the spot speed drawing contest and raffle of Huion tablets. 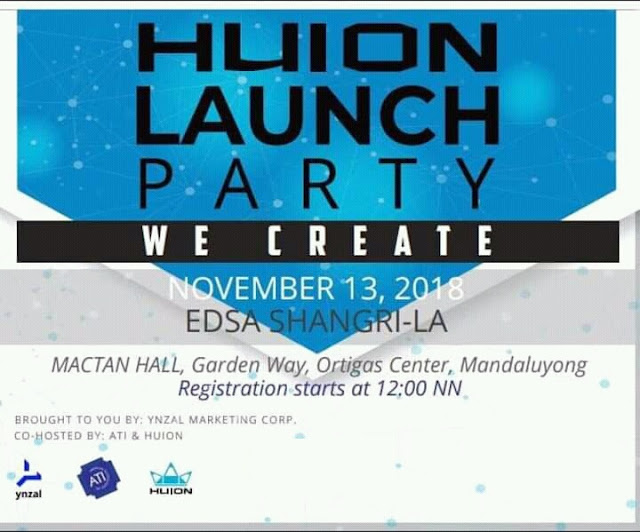 To register click here.
Posted by Demure Sweetie at 8:07 AM No comments: