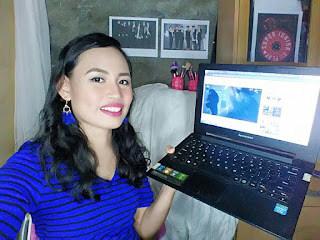 Reaction videos are a trend. I haven't tried it before because I would like to keep all the fangirling moments just to myself. ahahaha When I watch kdrama movies or Korean variety shows via Youtube I watch it alone.

I was so encouraged to do a reaction vid because one of my favorite kpop groups Super Junior made its comeback after 2 years and 2 months. They released their 8th album called Play.

I even wore a blue shirt and blue tassel earrings which represent the sapphire ocean.

I watched the videos uploaded in their Vlive channel SJ returns. Those were the preparations for their album. The title song is Blacksuit. I can remember the members asking Shindong oppa for predictions on album sales. He said around 27 or 34. Heechul oppa was asking can it be 100,000 album sales or more than?

Congratulations to Super Junior and ELF for having number 1 spot in iTunes in many countries. I hope that they would have many wins and trophies from music charts.

Just like any kpop fan I also have my own theory or interpretation of the video.

For me, the Blacksuit symbolizes their album. The auction serves as the marketing and advertising strategies on how the album will sell. The members were planning on how the blacksuit can be stolen by the girl. The girl is actually the fans/ELF. Suju members partied after the suit is gone because their album had high number of sales. ^_^

How about you? What is your theory?

Below is my video explaining my theory.

For a Bonus I also made a reaction video on their Mcountdown performance. I guess I am not the only who was excited to see the live perf because during the first hour that Mnet uploaded it in theor Youtbe account the views are already above 100,000.

I still can remember Heechul oppa saying that Super Junior will be back in the Philippines for Super Show. He said that last year during MBC Showchampion in Manila. I was there personally. So I really hope they would come back again here in the Philippines.

Email ThisBlogThis!Share to TwitterShare to FacebookShare to Pinterest
Labels: kpop