The Whitney Houston Show 2016: Live in Manila at the PICC, Plenary Hall on August 27

Don’t miss this critically acclaimed once in a lifetime live show of a tribute to a woman who has long been an icon of pop music and vocal ability, The Greatest Love Of All – The Whitney Houston Show Tour 2016 on Friday, August 26th, 8PM at the IEC Pavillon, Cebu City and on Saturday, August 27th at the PICC Plenary Hall, Pasay City, Manila. 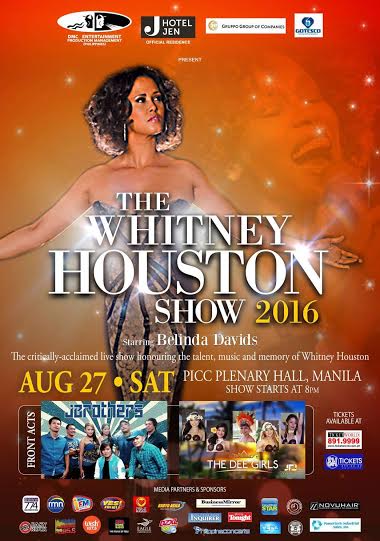 The astounding tribute show taking the world by storm! A fun and heart-felt concert dedicated to the incomparable Whitney Houston. The Greatest Love Of All: The Whitney Houston Show celebrates the magnificent catalogue of hits that Houston made famous during her 30 year career. The 2 ½ hour concert and stage show includes hits such as 'How Will I Know', 'I Wanna Dance With Somebody', 'Where Do Broken Hearts Go', 'Didn't We Almost Have It All', 'I'm Every Woman', 'One Moment In Time', 'I Have Nothing' and of course, 'I Will Always Love You' and many more.

Starring the breathtaking voice of Belinda Davids live in concert featuring the full production show from the US. Direct from sell out shows across Europe, plus a full band, dancers and theatrical effects, this show is not just a brilliant tribute but a spectacular concert experience in its own right and should not be missed!

In the wake of Whitney Houston's tragic passing in 2012, her timeless music and awe-inspiring voice have received renewed appreciation from her legion of long-time fans and garnered a new generation of admirers who appreciate Whitney's unique voice, undeniable talent and pervasive charm as a welcome contrast to the artists prevalent in today's contemporary music.

In preparation for such an anticipated show, and in respect for Houston's legacy, Showtime Management dedicated over 12 months to perfecting this production and finding the right star. After conducting over 15,000 auditions in 12 countries, accomplished South African vocalist BELINDA DAVIDS was selected to pay reverence to Houston with her carefully crafted renditions.

Posted by Demure Sweetie at 3:00 AM